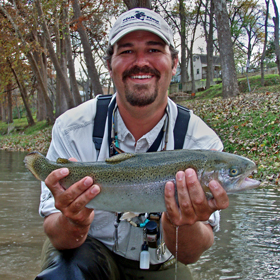 Dan Cone, owner and primary guide for the Castell Guide Service in the Texas Hill Country, will introduce members to his home waters at the June 4 membership meeting. Dan grew up fishing and hunting and spending summer days on the Llano River. After graduating from Texas A&M in 1999, he returned to Llano and got a “real job,” but found himself spending more and more time fishing. In 2002 Dan began guiding on the Llano River.

In 2006 he began splitting his time between Texas and Colorado. He worked as head fishing guide for Elktrout Lodge from 2006 to 2008, and in 2009 moved to the Roaring Fork Valley to work for Frying Pan Anglers, where he worked the Frying Pan, Roaring Fork and Colorado rivers. In 2011 Dan began splitting time between Frying Pan Anglers and managing San Juan Angler in Durango, Colo., later adding New Mexico’s San Juan River below Navajo Dam, along with the Animas and Pine rivers and small creeks to his offerings in Colorado & New Mexico.

Today, Castell Guide Service provides guidance and instruction in the Texas Hill Country. “It is our mission to provide the best guiding and instruction to both new and experienced anglers looking to explore the diverse fishing opportunities available in the Texas Hill Country. We specialize in the winter months on Guadalupe River fly fishing for rainbow trout, and in the spring and fall on fly fishing the Llano River, San Marcos, and Colorado rivers for warm water species such as Guadalupe bass, Rio Grande cichlids and carp.”