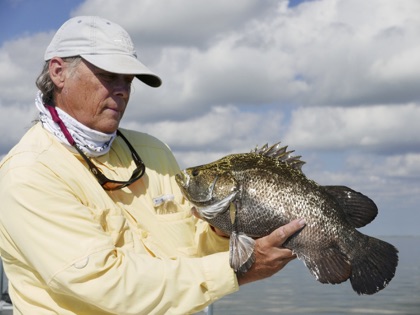 “We will cover the target species with the proper casting and presentation techniques along with how to best play the fish for a quick release for better survival. I present the few fly patterns I use (which are mostly standard patterns slightly modified) and why they were selected for a specific condition. And, it is not all about the fishing as the bird life and other things observed make for a complete day out on the water with a fly rod and a camera.”

Steve grew up in Fort Myers, on the Florida Gulf Coast, and has lived there for all but the six years he spent in the U.S. Air Force, when he was stationed in Duluth, Minn., Klamath Falls, Ore., and Colorado Springs. “Growing up hunting, fishing and camping, the Air Force years allowed me to experience new outdoor opportunities,” he says. “The fly fishing/fly tying seed had been planted with a gift of A. J. McClane’s Standard Fishing Encyclopedia. The fly plate photographs in that book were what received my attention the most. All the trout patterns were tied by Harry and Elsie Darbee and the steelhead patterns by E. H. “Polly” Rosborough. While living in Oregon I feel fortunate to have met Polly and watch him tie many of his patterns.”

He learned to cast and tie flies while in Duluth. “Not knowing anyone, the casting took much longer to figure out than the tying,” he says, as he relied on Poul Jorgensen’s Dressing Flies for Fresh and Salt Water. “Of all the books I now own on fishing and tying (and my wife will confirm there are many), I believe this book is still the best on learning to tie.”

After returning to Florida in 1981, he kept his feet in saltwater. “I was very lucky to meet Lefty Kreh in February 1982. I thought I had learned by myself to cast well enough until the first time I watched him casting. It looked so easy and smooth,” Steve says. “I knew I needed to relearn everything from him, which I did as best I could, and our friendship lasted to his passing. Through Lefty, I met Flip Pallot and was lucky enough to fish with him a few times. In 2003, I fished with Flip during the filming of two episodes of “Walkers Cay Chronicles,” featuring this area of Southwest Florida.

Steve guided saltwater fly fishing for 23 years, retiring in 2015. “But, I always spent some time in the summer out west after trout, and since retiring I try to spend two or three months camping and fishing Montana, Wyoming and Idaho,” he says.

Oh, and about that interesting fish he’s holding in the photo. It’s called a tripletail – unless you’re in Mississippi, he says, where it’s called blackfish, while Texans can think of them as really big bluegills. “This is a smaller one, around 17 inches,” he says, but he has landed a 20-pounder. He will discuss them in his talk. Suffice it to say tripletails are usually in at least eight feet of water and require an uncommon fly presentation.