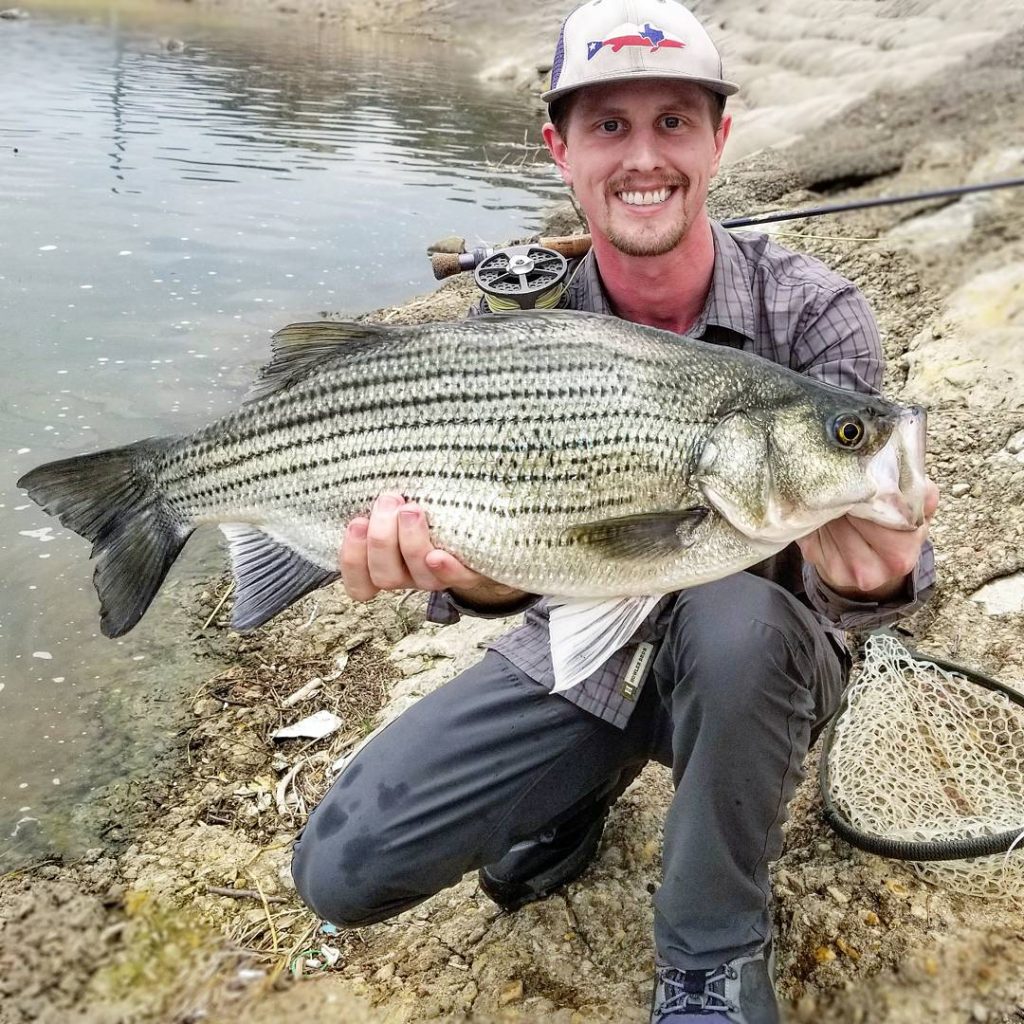 Many FWFF members have already seen the big hybrid striper that member Adam Tate wrestled from the Trinity River last month. But here, as they say, is the rest of the story, told in Adam’s own words.

On Feb. 5 I was trying to gear up to host Landon Mayer a day before he was set to speak to our monthly membership meeting in Fort Worth. I get a thrill out of creating the speaker presentation schedule for the club, but I  get a bigger thrill pushing my skills and taking some of the best fly fishers in our nation out here on our home waters. But, I also I freak out.

Last year Landon and I went to LLELA at Lake Lewisville and chased buffalo with success. I know LLELA has a pretty high success rate in the colder months, but we had been there, done it. After wrapping up some work, I made it back to Fort Worth and thought, “Hmmm, I know it’s way too early, but I need to check my spot on the Trinity.” I ran home, changed, grabbed my favorite craft fur clouser, and out the door I went.

Cast after cast, nothing. My mind was telling me, “Adam you are about 2-3 weeks too early.” But I rarely — OK, never — quit when I hear that voice. So I switched my presentation, and WHAMM! The fish stayed in th 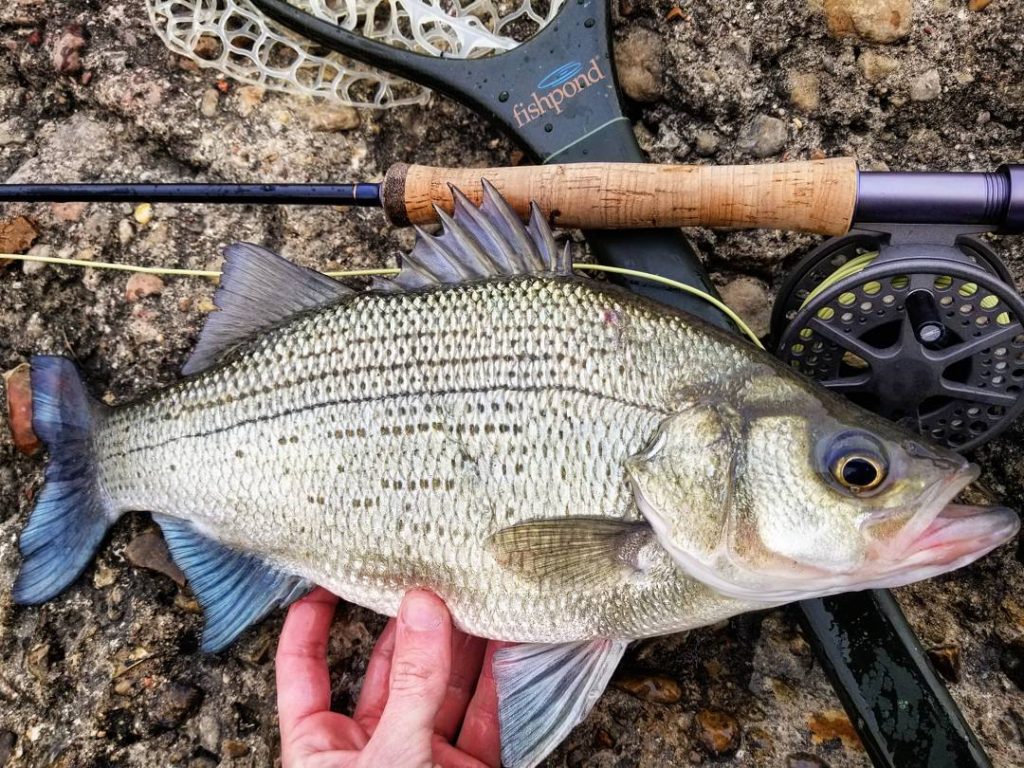 e current, so I couldn’t size it up at first. Truthfully, I didn’t know what I had, but it was no dink. I netted the fish, and my eyes opened wide! A large white bass!! I checked the tongue for one tooth patch and measured: 17 inches on this beaut!

I put the white bass back in my net and held it in the water while I checked my phone. The  catch and release record for the Trinity is 15 inches, but for a TPWD record you need a witness. I looked around. Nobody. It was a crummy day with the weather blowing in, so I took some photos and released the fish, I wouldn’t get the record. I went home proud, but also burning inside. I fished it three more times with the water temp measuring anywhere from 48 to 58 degrees without a single hit. That fish was a fluke,  pure luck, no reason to expect a repeat — until two weeks later.

I walked up to the apartment after work and found my roommate Andrew heading out the door to wet a line. Of course, I told him I’d catch up. As I walked out I checked back on my Instagram and saw it was exactly one year ago that I caught my largest white bass on the Trinity. But I’d been skunked those previous three trips, so after we both tried what we know with nothing to show for it, I remember looking over at him, and we both shook our heads.

Think, Adam: if you were a fish, where would you be? I switched it up and felt a tick. Was it for real or did just  debris in the water? I repeated the same line but this time made sure to have zero slack this time. But the way the fly line ripped out of my hand, I don’t think it would have mattered this time.

“ZZZZzzzzzzz” went my reel as 8-weight line spilled out! I knew the fish was big, but it was also running downriver. Big fish and smart!. I finally got the upper hand, and pulled him out of the current. Still, the fish  stayed deep. Bigger fish! Then I remembered I had tied on a trailer, a tiny size 14 jig-style fly for running whites. On 8-pound test! Please don’t be on my bottom fly!!

My clouser up top was on 20-pound fluorocarbon. Please be the clouser! Then the fish kicked into a new gear, as if it just woke up from being on the kids’ playground and realized it’s actually fighting for gold in the Olympics. The battle was on. I yelled out to Andrew, “Homie I’m going to need your help!!” We were watching carefully for the first surface, and when it came it did not disappoint. I saw the tail splash as the fish maneuvered itself back away from me, and I almost lost my marbles.

This was going to break my personal record. I knew it instantly. Last year I landed a 24-inch hybrid on March 2, so I knew they were here. I  threw my net  to Andrew, knowing I needed  leverage and so making my way up the bank to gain any advantage I could. T then it was in the net. And this time I had my witness.

I was shaking. “We’ve got to measure it,” I told Andrew. The tape stretched 25.25 inches. I thought it was a striper, since there didn’t seem to be the typical broken lines sported by hybrids we catch in lakes. Anywho, I made sure to get all the necessary measurements, and we released the fish. After some online debates, I decided it would be best to contact TPWD and visit with their fish biologist. In the morning I was informed that indeed it was a hybrid striped bass. Yay, better for me, I just nailed the new Texas State Flyrod Catch and Release record! I brought this record home to Fort Worth! I was going to go after it this Summer with my dad out west, but what a beautiful blessing to come this early in February.