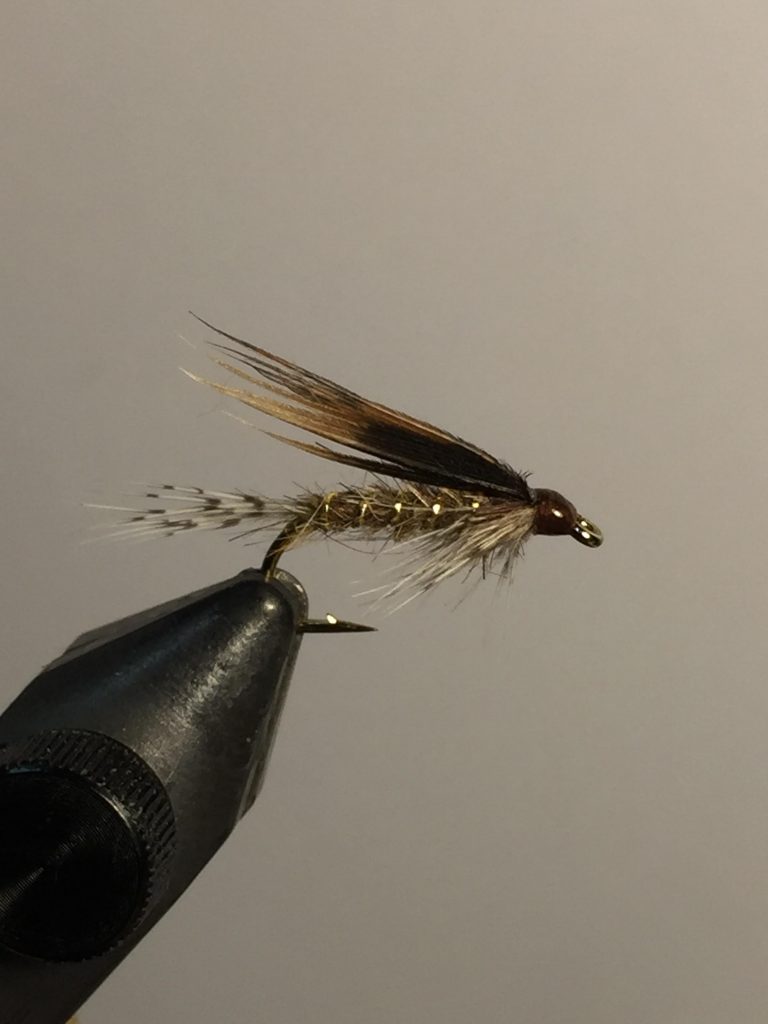 Our June Fly of the Month comes to us from the trying desk of Sharon Leissner.  Here’s what she has to say about the fly:

After tying on tiny midges and blue winged olives all winter on the Lower Mountain Fork River (LMFR) in Southeastern Oklahoma, my eyesight returns, and I breathe a sigh of relief when the refreshing signs of spring are heralded by the March Brown mayfly hatch. As the water temperature rises, these clinger nymphs began to move from somewhat faster riffles into slower water in preparation for hatching into adults.  Along with the bluebonnets and bright green leaves budding out on the trees, I look forward to their quiet emergence.

In mid-February or early March, I’ll often be fishing in the afternoon and an adult will land on my fly rod causing joy and excitement to flood my heart at their sudden appearance.  I always take a moment to marvel at these beautifully patterned mayflies. Even though, at first glance, they seem rather dull in color, a closer examination reveals the incredible network of veins that run throughout their translucent wings. I enjoy tying and fishing the wet fly pattern, which is pretty much a hare’s ear nymph with wings.

The March Brown is a fly pattern with a long history. Originally fished in the streams of England over 600 years ago, no self-respecting fly fisherman would be caught without this pattern in their fly box in every form including nymph, emerger and adult.  To this day, it’s still a very important hatch that’s heavily fished there in March. Here in America there are two main species including the Eastern March Brown and the Western March Brown.  Some confusion exists because the eastern family formerly known as Stenenoma vicarium “march brown” and Stenonema fuscum “gray fox” have been found to be the same species and are now renamed Maccaffertium vicarium.

According to entomologist Rob Woodruff (Woodruffs Guide Service), we have the Eastern March Brown on the Lower Mountain Fork, “They are a little bigger on the Lower Mountain Fork than you see in some Eastern rivers. Both nymphs and adults may be as large as size 10 with the midline at about size 12. Because they are one of the mayflies that sheds its larval skin underwater and comes to the top with wings exposed, soft hackle flies are very important and are usually what the trout feed on the most.”

I believe this affinity that trout have for soft hackled flies has given rise to the success of the wet fly pattern on the LMFR.  Tied with patterned partridge tail and hackle and mottled brown turkey wings, the soft movement of these materials in the water does an excellent job of mimicking the nymph.

My personal preference is to tie the pattern in size 12 and fish it, un-weighted, just below or in the water surface.  Both dead drifting and swinging the fly can bring aggressive strikes.  I also tie it with weight in the underbody and fish it year round as a nymph pattern, tumbling it across the bottom of the stream.

The March Brown nymphs are available as a food source year round on the LMFR and according to Mr. Woodruff, “They spend two years as larvae; they are always size 16-18 nymphs in the river. They don’t like the faster rocky water of Spillway Creek, so there aren’t as many there as there are in Evening Hole and South. They are the most abundant invertebrate in Zones 2 and 3.”

It works so often, when nothing else does, that it’s become my number one searching pattern, and I’ve found tying it in the wet fly form gives the trout something new and different to look at. I’ve also had success with it in Colorado and New Mexico as well. I hope you enjoy tying and fishing this pattern.

Body – Dubbed fur from the ears of a hares mask, include black guard hairs

Wing – Turkey in a mottled brown

Note: Make sure when you set the wing, that the point where the bottom of the wing starts to angle upwards is aligned with the bend in the hook. This will help keep from making the wings too long.