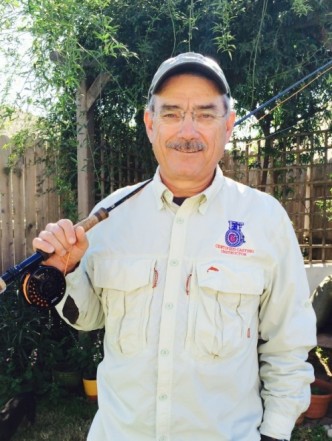 The thing that comes to the mind of many when thinking of a roll cast is a circular motion.  Most often the result of a circular rod tip motion is a wide open loop and in the case of a roll cast the line crashing in a pile a short distance in front of you.  This is most likely not what was wanted.

The roll cast is usually the first cast that I teach.  Imagine yourself at the water’s edge where most likely you have your rod together and the line strung up. What’s the next step?  You strip line from the reel and end up with it hanging between the reel and the first stripping guide.  Now what?  That pile of line between the reel and the stripping guide has to be moved outside of the rod tip before a cast can be made.  You are alone and have no one to pull that line out of the rod tip or lay the rod down and pull it out your self.  Not that you would, its not efficient.  All you have to do is to make a few forceful wiggles of the rod tip and the momentum of line already out of the rod tip will pull the remaining line through the guides and out of the rod tip. Now that pile of line that was between the reel and the stripping guide is now outside the rod tip in some sort of awkward position in the water.  Remember that one of the principles of making a good cast is to eliminate as much slack as possible.  Again you don’t have a friend to pull all the slack out, so what do you do?  This is where the roll cast is needed and why it is taught first.  A roll cast here will move the line from the position in front of you out into a fishing position.  It may not reach as far as needed but can be done again or may have a straight enough layout for a pickup and lay down cast or you can just fish it from there.

The roll cast is a fly fisherman’s best friend when you have no room behind you for a back cast due to trees, brush or a high bank.  You might ask why this is so.  The answer is, a back cast is not needed when making a roll cast.  All that is needed is a set up position and a forward cast.  The set up position is made by slowly dragging the line and pointing the rod tip to the rear, as far as you can.  The rod tip is then raised up into a slightly off vertical and rearward position somewhere between the12:30 to 1:30 clock position and then STOPPED.  This stop is important as it allows the line to stop moving and water tension to “grab” or hold the line somewhat. The line should hang from the rod tip in what is called a “D” loop behind you with the line touching the water one to one and a half rod lengths in front of you. The water tension and the amount of line behind you helps load the rod, which is beneficial in making the cast.  From the set up position, smoothly accelerate the rod to an abrupt stop just as in a normal forward cast.  The casting stroke should be something like this, \\\\\\\\/, going left to right, using the back slash for the hand translation and the forward slash for the late rod rotation just before the stop. Note that the slashes are going in a straight line, as your rod tip should be in an actual cast.  A point to remember is when making the cast is to not cross the line layout on the water.  Make the cast parallel or to the side of the layout on the water.  The straight path of the rod tip and abrupt stop will yield a narrow elliptical loop, which should unroll the line in air and settle to the water.

Imagine yourself between the two stairways below the Denison Dam on the Texas side of the Red River with no water being released.  There are many rocks, ledges and snags to navigate through when casting and retrieving your fly in the low water conditions.  You’ve only been there a few minutes and made only a few casts when you feel a tug, but it’s not that striper that you came for, it’s not moving.  You are hung up!  Don’t get all keyed up and break the fly off. A roll cast may be used to free a snagged fly. To free the fly make a roll cast in the direction of your fly where the unrolling loop often times will free it from the snag.  Notice I said often, not every time, if it doesn’t then you can get all keyed up!

Imagine again that you are at your favorite neighborhood pond, tank or lake where you have made a cast and finishing your retrieve where you have a band of moss or weeds twenty five feet from the bank and more trees and brush behind you.  You can’t make a normal pickup.  What do you do?  A roll cast can be used to pick up a fly or popper before you drag it through the vegetation near the water’s edge and with a line shoot you are back in business.

Using our imagination again you are wading in the South Llano or Brazos River, take your pick, and see a splash in a shady spot near the bank under overhanging limbs from stream side trees, which are only three to four feet above the water.  How do you get that Llano Bug back there?  A sidearm roll cast can be made to place your fly underneath the low over hanging tree branches where a normal overhead or roll cast would be hopeless.

When you feel like practicing your roll casts, practice on the water.  Practicing on the grass does not simulate water conditions encountered when fishing. The rod does not load properly due to the lack of line tension on grass, so the cast is less than desirable.  If you must practice on grass use an anchor such as a clipboard, book or some sort of contrived device to provide tension on the line when making the cast.

A major factor in making a roll cast is the characteristics of your fly line.  Weight forward and double taper lines are somewhat equal in performance until you get the head of a WF line out or the rod tip then the double taper line is a winner.  This is because the thinner running line of WF lines cannot turn over the heavier head easily. That being said most WF heads are in the thirty to forty foot range, which is where a lot of fish reside.  The DT line belly is the same thickness through the entire length of line, which turns over the line easier than a thinner line trying to turn over a thicker line.

So which line do you choose?  If you never have the need to bomb a cast out to the horizon and like to be able to switch ends of a DT line for longer use then it could be the one for you.  On the other hand, as mentioned earlier DT and WF lines are similar in performance until you get past the head length on a WF line where it becomes the distance winner.  So it all depends….and that is how we roll!