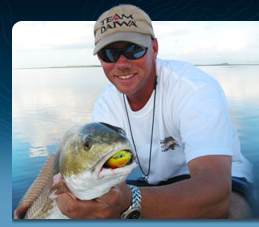 The “Shallowist” Captain Steve Soulé, is a full-time professional fishing guide and seasoned tournament angler who fishes the Galveston and Matagorda Bay complexes of the Upper Texas Coast. Steve specializes in fly-fishing and light-tackle fishing with artificial lures, targeting trophy trout, redfish, and flounder. As a Federation of Fly-Fishers certified fly-casting instructor, Steve teaches casting from basic through expert in the Houston area. Steve regularly gives casting and fishing clinics and conducts seminars at local clubs and retailers in addition to national events. Captain Steve was one of the founding partners of the coastal fly-fishing school in Houston.

As a young man, Steve cut his saltwater “teeth” fishing the flats of Flamingo, in Florida Bay, for shallow roaming redfish. By age eight, he was successfully sight casting with artificial lures. As his interest grew, he picked up fly-casting from his uncle, Captain Skip Soulé, who is a long-time fly-fisher and guide in the Florida Keys. It wasn’t long before Steve was catching Tarpon, Snook, Bonefish, and other species on fly and developing serious interests in the art of fly-casting and fly-tying. This led Steve to the development numerous fly patterns that have been featured in print and pioneering new techniques for saltwater angling.

With his roots firmly planted in saltwater, Steve returned to Texas in 1991 and began applying his knowledge of redfish and other shallow water species along the Texas Coast. Along with fly-fishing and sight casting, Steve is also a consummate trophy trout hunter who enjoys working top-water and slow-sinking flies and plugs in his pursuit. He is known for his monthly columns on fly-fishing and trophy trout fishing in Gulf Coast Connections Saltwater Paper.

Captain Steve is licensed by the US Coast Guard and Texas Parks and wildlife, and a committed conservation supporter who regularly donates to the CCA and SCA Texas. As a professional writer and guide, he has been featured in both local and national publications and is dedicated to the promotion and preservation of sport fishing.

Steve will be our speaker on July 7th at 7PM. For more information about our meetings including location maps, click HERE.