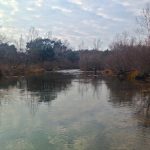 The water in this river is beautiful

The Wooly Bugger does its job 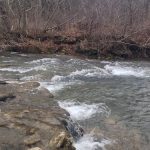 Fish with nymphs below the waterfalls 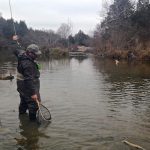 Eric pulling in a nice fish 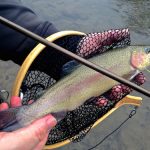 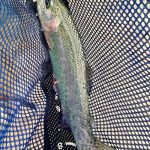 The Blue River is stocked with about 100,000 trout each year

Looking for a place to catch some fish this weekend? You should think about trying the location of our January Club Outing, the Blue River near Tishomingo, Oklahoma.

The water in the Blue River is as clear as any water that I have ever seen. It is a beautiful blue/green color that allows you to see all the way to the bottom in holes that are at least 5 feet deep. When it is filled with trout, as it is right now, you can see them swimming like they are in an aquarium. Of course, this means that they can see you, too! So try to be as stealthy as possible.

In the past, I have been frustrated by the Blue River. I have gone on trips where catching one or two fish per person was not out of the ordinary. This was not the case today. There were fish everywhere! It was quite a sight!

One of the most difficult problems when fly fishing the Blue River are the long stretches with a lack of noticeable current. In these areas, it becomes very similar to lake fishing, where you must provide the movement of the fly. A wooly bugger is a good bet in these areas. Where there is current, the fish are much more likely to take nymphs and egg patterns fished under an indicator. When you do hook these fish, you will know it. They put up a strong fight and many times put on an arial display.

The surprise of the day came when I hooked and landed a brook trout. I had heard several stories about brookies being caught at both the Blue and LMF Rivers. Well, the rumors are true! I hope they continue to stock some of these.

If you have never been to the Blue River, there are two main locations to fish. The first is near the Hughes Crossing. This is the most popular spot with people that want to keep trout to eat. (If you are keeping trout, make sure that your stringer has both your name and license number printed on it.) The second area is farther north off of HWY 7. This area requires a little farther walk, especially if you go all the way to the catch and release area.

There is camping in several spots along the river and it costs nothing to put up your tent. So, head north to the Blue River and plan on stopping off at Scotty’s One Stop for a hearty breakfast to get you going.

For more information, including regulations and a map, please visit the OK Wildlife Department.